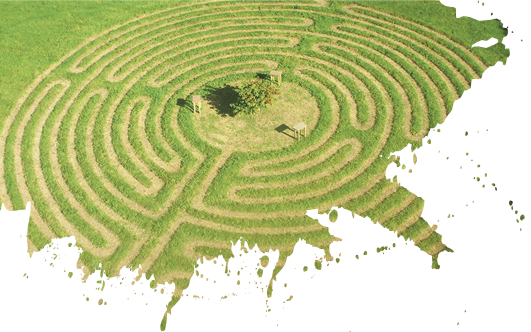 It surprises many to know that Tallaght was a place of pilgrimage for a thousand years, in memory of St Maelruan who founded a monastery here in 769 AD. The monastery was devastated by the Vikings in 811. It survived, however, for at least another three centuries. The beautiful Stowe Missal came from here, as well as other valuable books, such as the Martyrology of Aengus, and the Martyrology of Tallaght.

The Dominicans were founded in 1221; they came to Dublin in 1224, and made foundations throughout the country.  After the turbulent centuries of persecution they settled in Tallaght in 1856. The buildings bear witness to the development since then. The Retreat Centre, opened in 1936, was reconstructed in 1957.  To this day, the stream of visitors has never ceased.  For more than 70 years it has been an oasis of tranquillity for countless people, as Tallaght developed from a little country village into the third largest centre of population in Ireland.  A symbol of the abiding presence of God in the midst of change, it continues to be a place of peace, contemplation, and renewal for all who come here.

A large tapestry in the main conference room shows the three ages of Tallaght: the ancient monastic settlement (8th century), the mediaeval period (a 14th-century tower, now an oratory, forms part of the Priory buildings), and modern times.

THE CENTRE has:
● One large and four smaller conference rooms ● A Lounge ● 30 single bedrooms ● An oratory ● Large dining room ● A lift to all floors ● Newly refurbished bathrooms ● A large 18th-century walled garden ● Beautiful walks ● Ancient trees ● A labyrinth ● A bookshop with a good stock of religious books ● A range of gift objects: photo-cards, pottery, and wood -carvings all made in the Centre, candles, incense, etc.  ● Free wi-fi ● Free parking for participants.